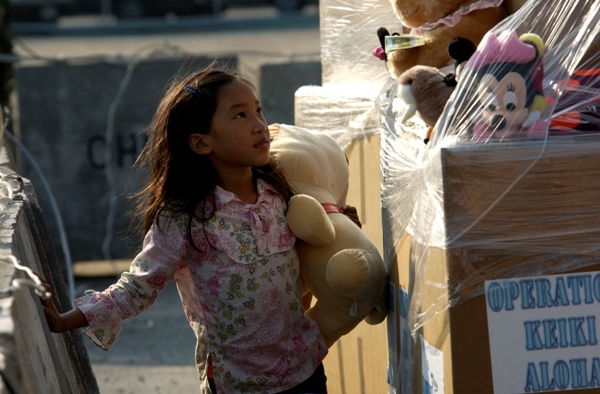 A Thai child gets to choose a toy after losing her home in Phuket. ©Shawn P. Eklund, Wikimedia

Natural disasters like the earthquakes, tsunamis, and super typhoons are traumatic events outside the normal experience of people. It affects not only individuals, but communities as a whole. Psychological effects can persist for years, and survivors often feel that their lives have changed forever.

Phases of a Disaster

According to studies, there are six phases of a disaster.

Pre-disaster (Warning or Threat). The community’s response is dependent on the kind of warning they receive. Natural disasters usually allow communities to prepare for evacuation. Human-caused disasters like chemical oil spills or bombings usually have no advance notice.

Disaster (Impact). This is the actual onset of disaster. Survivors could feel panic at this point, and the main concern is survival.

Heroic (Rescue). In this phase, there is a general atmosphere of heroism. People help out each other and even risk their lives to save other people. When typhoon Ketsana ravaged the Philippines in September 2009, for example, a lot of civilian rescuers have been killed saving neighbors and strangers from the flood.

Honeymoon (Community Cohesion). There is an outpouring of support for the survivors of the disasters. Financial, material, and human service assistance from national and international organizations usually abound.

Disillusionment. In this phase, external support will have petered out, and communities affected by the disaster may feel abandoned and neglected. There will be feelings of hostility for perceived unfairness of resource allocation.

Reconstruction and Recovery. In this phase, around one to three years after the disaster struck, communities will have begun to rebuild their lives. Physical structures are built again, and life seems back to normal.

Physical and Psychological-Social Impacts of Disaster

The impact of disasters is widespread, and physical effects include destruction of property; death or injury of loved ones; shortage of basic needs such as shelter, food, and water; and vulnerability of at-risk groups for exploitation, like child trafficking.

Psychological effects include fear and anxiety about survival, reunification with family members, and relocation; and grief for the loss of loved ones, property, and other valuable possessions.

Majority of people affected by disasters are naturally resilient and recover even without interventions. However, there is a small percentage that would require attention from a mental health professional.

According to the Centers for Disease Control and Prevention, when any of the following are still present in a survivor months after the event, counseling with a professional may help.

Interventions for Communities Affected by a Disaster

After a disaster strikes, people in general feel compelled to extend assistance. While it is good that a lot of people would like to help, uncoordinated provision of aid would only lead to chaos, as it will result to some being given too much (especially the most accessible places), and to others being neglected.

It is important, therefore, to observe the following when planning to give interventions to communities affected by a disaster:

Aside from provision of practical needs, however, psychosocial activities must also be given to at-risk individuals.

Disaster work is emotionally and physically exhausting. Frontline workers who are directly in contact with the survivors are at risk for being traumatized themselves. Being constantly faced with the magnitude of the disaster’s impact, the survivors’ reactions, and how the survivors themselves treat these workers can have an overwhelming effect on them.

Ensuring that these workers are given adequate shelter, food, and rest during their work, even if these are not available to all survivors, may seem unfair but absolutely necessary. Keeping the workers in a healthy condition ensures that they can continue providing services to affected communities. Over and beyond their practical needs, however, psychosocial assistance during and after their work is also a high priority.